One of the issues that “The Poxes” will attempt to analyze (once the story starts on Oct 23) is the fact that the populace will complaint against authority in times of trouble, no matter what. Take a look at the following two pictures… 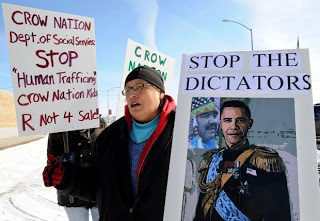 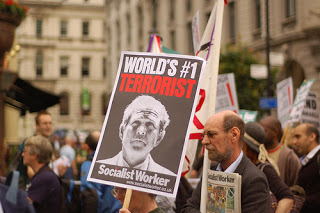 In both pictures, people are rallying and calling out the President of the United States based on what they perceive is wrong. In the case of George W. Bush, it was the Wars in Iraq and Afghanistan that really got people all riled up, not to mention his domestic policies. In the case of current President Obama, it’s the perception that he is too Liberal and that the US Government is out of control.

To be honest, the government was “out of control” in the Bush era. Heck, we had a whole new Department (of Homeland Security) created, not to mention the Patriot Act and the Director of National Intelligence. Just look at the budget and ensuing deficit. The Republicans have expanded the Government as much as the Democrats. But that’s not the point of this post.

The point is that there seems to be a threshold based on the economy or popular sentiment or the general state of things at which the people get all riled up about the government. If most of us are employed, have good credit, are buying houses, and are healthy, the sky’s the limit. The Government can do no wrong. On the other hand, if unemployment takes hold, the economy is bad, or there is some crisis that makes a lot of us sick or a lot of us not well-off, then the Government is our worst enemy.

And it’s not just in the United States, either.

On October 23, I will introduce to you a story out of my own mind but based very much on things that could happen. The first chapter is all about a crisis and how our protagonists and antagonists initially react to it. No, it’s not something as spectacular as September 11, 2011. However, the event in the first chapter is quite deadly and quite scary to the characters.

I really hope you like it, but I hold greater hopes that you can see that we really are one big crisis away from devolving into a pack of wild apes… Ready to take each other out for nothing.

2 thoughts on “The More Things Change…”