Any anti-vaccine activists worth their weight in salt will tell you that thimerosal is ultimate evil because it contains mercury. Never mind that it is metabolized into ethyl mercury, not methyl mercury. Like ethanol and methanol, there is a difference between ethyl mercury and methyl mercury. One is excreted from the body; the other is accumulated.

This is the case with all ingredients in vaccines. Yes, they have scary names, but, no, they won’t do anything to you. (You get immune reactions, which some can be severe if you’re predisposed to them, but that predisposition makes you the unlucky winner of a lottery with worse odds than most games of chance.)

For some weird reason, giving children bleach solutions to drink and bleach enemas is not bad in the mind of some anti-vaccine parents. They think that bleach will do some magical thing (something not based in science) and “recover” their children from autism. I’m not joking.

To recap: ingredients in vaccines and the concentrations found in vaccines, good. Bleach to drink or via enema, bad.

A reader found this video on YouTube the other day and we made a joke about how anti-vaccine weirdos will probably think that drinking hydrogen peroxide will make your liver explode:

But then I got to thinking about the “alternative medicine” practice of giving children hydrogen peroxide to treat autism, and I Googled it. I should have never done that: 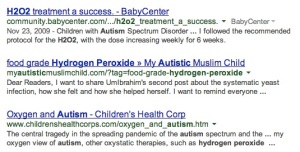 All three pages seem to uphold the theory of autistics being autistic because there’s something wrong in their gut. If this sounds familiar to you, it should. It’s the same deluded theory that Andrew Jeremy Wakefield “felt” caused autism. These parents are convinced that their children have an imbalance in their intestinal flora, or maybe have the vaccine virus somehow “stuck” in there, or some other weird theory. Like the bleach enema  child abusers, these parents think that oral hydrogen peroxide will take care of the problem.

Never mind that there is no evidence that, one, autism is caused by intestinal issues, and, two, treatment with hydrogen peroxide or any other way to kill bad gut flora is an effective treatment against autism.

Of course, the evidence they point to is all anecdotal, and whatever comes close to sounding scientific is presented by people I personally would label as “quacks”. For example, in the first page, there is this:

“I followed the recommended protocol for the H2O2, with the dose increasing weekly for 6 weeks. After about 4 weeks his physical yeast symptoms began to clear (the “diaper rash” he’s had since BIRTH and has still had even after potty training, the rash on his face, the nasty, nasty poop) and he bacame sharper and better focused. Many things have brought about temporary improvements, so I didn’t want to consider it a success until I was sure.

I’m sure:). After the 6 weeks were up I continued him on a low daily dose. His symptoms have not returned, he’s had a huge speech explosion, he’s less impulsive and destructive (although we did have a super-bad week after his flu shot, but he rallied!).Two days ago I felt it was safe to remove the security chain from his bedroom door that’s been there since he was 2. As many of you must realize, that was huge for me.”

I have to give this parent props, though. They vaccinated the child against influenza, something that can be super deadly to children with neurodevelopmental disorders.

In the second page, I found this:

“Then I prayed to Allah again and again for some thing else, then He lead me to an article “the cure for all diseases” by Dr.Hulda Clark.I did stomach cleansing followed by parasite cleansing and alhumdulillah 70% of my problems went away.I became happy and started doing cheating in food here and there and became sick again.I told my husband that I need to take Nystatin for a long time, but how will I follow the diet with no grain at all , no fruits and no everything.Then I prayed to Allah again and I finally came to ‘Dr.Whiting’s Oxygen therapy’ where he mentioned how yeast infection can invade your body and make you miserable.He used 35% food grade hydrogen peroxide with success in getting rid of candida.

Now don’t be scared of Food grade H2O2 and educate yourself, it is only rain water and oxygen that every cell of our body need.Now you can get 35% food grade h2o2 and dilute at home to use it as it is a cheap way, but I was not good at that, so I bought the oxygen from Dr.Whiting’s site, it is expensive so I bought only one bottle and after one month I was 99% good.Since my whole system was full of yeast I have to be on H2O2 in a little dose on a daily basis, so I am and I feel perfect with Allah’s blessing.I give it to my son also and he is doing well too mashallah.”

And then we have the third page:

“Direct evidence for my oxygen view of autism was recently published by researchers at the International Child Development Resource Center, Melbourne, FL, USA.2 Their paper included the following in the conclusion section: “Children with autism who received hyperbaric treatment at 1.3 atm and 24% oxygen for 40 hourly sessions had significant improvements in overall functioning, receptive language, social interaction, eye contact, and sensory/cognitive awareness compared to children who received slightly pressurized room air.” (clinicaltrials.gov NCT00335790). I point out that while this hyperbaric study furnishes direct and strong validation of my oxygen view of autism, other oxystatic therapies, such as hydrogen peroxide soaks [some link here] and castor oil rubs [some other link here] are more appropriate for long-term use.”

Typical. Take a research study, misunderstand the findings (and some incomprehensible limitations, e.g. n=6, e.g. “Medical Hypotheses” journal? Really?) , and then try to sell something from it. The rest of that page is more of the same pseudoscience.

It is painfully obvious that people who resort to these types of “therapies” have little to no knowledge of basic human physiology. They fail to recognize that our bodies will do everything in their power to neutralize the offending chemicals they’re given. In the case of hydrogen peroxide, very few of it makes it to the gut if you ingest it. If you take it as an enema, you’re just asking for trouble. The bacteria in your intestines also make “catalase”, the same enzyme responsible for the exploding liver.

Best not to light a match near your ass when you’re doing a hydrogen peroxide enema.

Funny as the image of someone lighting themselves on fire through the use of a hydrogen peroxide enema, the fact that desperate parents of autistic children have done this (and worse) is no laughing matter. Parents of markedly underdeveloped children — children whose autism prevents them from truly interacting with the world or their interaction is filled with self-harming behavior or temper tantrums or worse — are already stressed enough as it is. They are prime prey for quacks who offer simple and affordable solutions. (Why pay for real medicine when you can just buy a jug of magic for $19.99 and get it shipped to your door?) They are tired, many times exhausted parents who would do anything for their children. Without the knowledge and information of science-based, evidence-based autism treatment and interventions, these parents really do anything, and the results can be horrifying.

Instead of investing money and other resources toward proven autism treatments and interventions, there are too many organizations that will invest in promoting quackery, in spreading misinformation about “alternative” treatments, or in traveling to the Cayman Islands for meetings.

Bleach and hydrogen peroxide are only the tip of the iceberg of quack autism treatments. Remember that physician in Maryland whose treatment was less than adequate and, well, pretty much failed? There are plenty of physicians (who went to medical school, for crying out loud!) who see themselves as champions of “alternative” medicine in the treatment of autism. Alternative medicine that has not been proven to work. Not one bit. Yet there is no short supply of quacks who’ll sell it to you for a few hundred grand.

And don’t get me started on injected hydrogen peroxide. Read on that here by Dr. Atwood.