The latest scandal to rock the anti-vaccine crowd has done nothing to sway the opinions of the True Believers® about vaccines and autism. If anything, they think that they have a smoking gun and all the evidence in the world to point their fingers at vaccines as the causative agent of autism. At best (for them), they have evidence that giving the MMR vaccine before 36 months increases the risk of autism for African American boys. That is a big assumption because the DeStefano paper that has been so widely criticized as of late dealt with a case-control study and odds ratios. Thinking that you can reanalyze it as a cohort study with relative risks is poor judgment and horrible reasoning.

I’m not here to talk about all that. Others are doing a fine job in peeling the layers of the ineptitude of Andrew Jeremy Wakefield and BS Hooker in trying to scam the American public about vaccines and autism again:

That right there should be essential reading for you to get caught up. Now, let me tell you about a special group of people…

There is a special group of people who are, for the most part, parents of autistic children (or children with other developmental delays). These people are special because, although their child is right there in front of them, they are under the impression that the child is dead. They refer to their “lost” child, or how their child was “taken” from them, all the while the child is breathing in front of them. In many cases, the child is not just breathing but trying to interact with them. I write “trying” because the amount of online activity these people have makes me wonder if they have any time for their living, breathing, interacting child in front of them.

I’ve told you before why I believe that these people need to walk away from their children, and I even got a rabid anti-vaccine and conspiracy theorist threatening to kill me if he ever saw me in person for it. (Some people react in the weirdest ways to being told the truth.) The joke is on him, though. Ideas are bulletproof.

With so many anti-vaccine activists “hooked” on the “BS” over the “whistleblower”, I started to notice something about how they were presenting themselves online. During their “twitter party,” many of them had a black ribbon as an avatar. Why? Because these “non-sheeple” were told to: 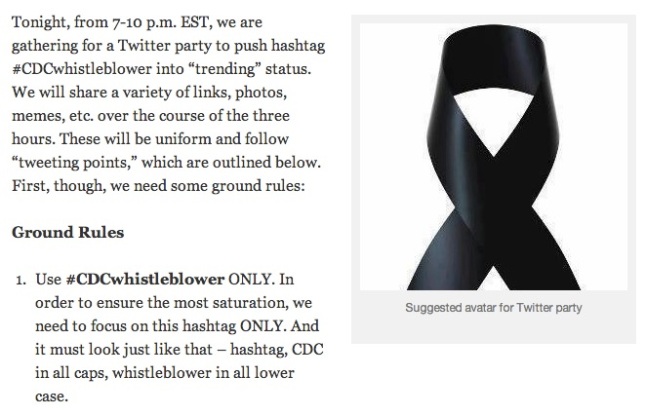 While the black ribbon can mean different things to different people, it’s main use is for grieving or remembering the fallen, the dead. The way that these people have used it is to try to bring attention to their cause by equating autism with a death or a loss.

I call on these parents who think hours-long “parties” on Twitter are the best way to advocate for their children to walk away from their children immediately. Those children deserve love, caring, understanding, and acceptance. Why not go fight for them at school meetings to get them more inclusive curricula in public schools? Why not go to your elected representatives and demand laws to protect your children from scam non-medical treatments like bleach enemas and chemical castration? Why not write letters to the editors of your communities’ newspapers to advocate for acceptance in the community of your children with special needs so that they will not be shunned from your society and, instead, be integrated into it?

But to display black ribbons and say that your child is no more because he or she is autistic? How in any reasonable terms is that the best way for you to do something for your child? Again, walk away, because there are thousands more caring and loving people out there to take care of them than you, based on your brand of advocacy on line and in person.

6 thoughts on “Autism is not death, unless you want it to be”