I’ve told you before what German measles (Rubella) can do to an unborn baby. Lucky for us, the virus is covered in the MMR vaccine, a very good vaccine with a very good record of safety and effectiveness. We’re also lucky that the virus only has us as its reservoir. Immunize enough of us around the world, and the virus is eradicated. Period.

Unfortunately, there are people out there who more than likely have a mental disorder. Why a mental disorder? Because only psychopaths would knowingly endanger others and knowingly spread rubella (or mumps, or measles). Let me make this clear: Pregnant women have a diminished immune system, and they are very susceptible to these infections. If you spread rubella, or any other thing, you risk killing a child in the most painful way possible. These psychopaths go on social networks and network with each other, agreeing to report to each other if someone in their unvaccinated families contracts measles, mumps, rubella, or chickenpox. They then coordinate parties to get their children, and each other, exposed to these diseases. In some cases, they even agree to mail each other lollipops that sick children have licked.

It is disgusting, and it is extremely dangerous. Reasonable people see this. These psychopaths don’t. And, yes, I’m using that term to keep myself from calling them other names. Here’s the evidence, off of Facebook: 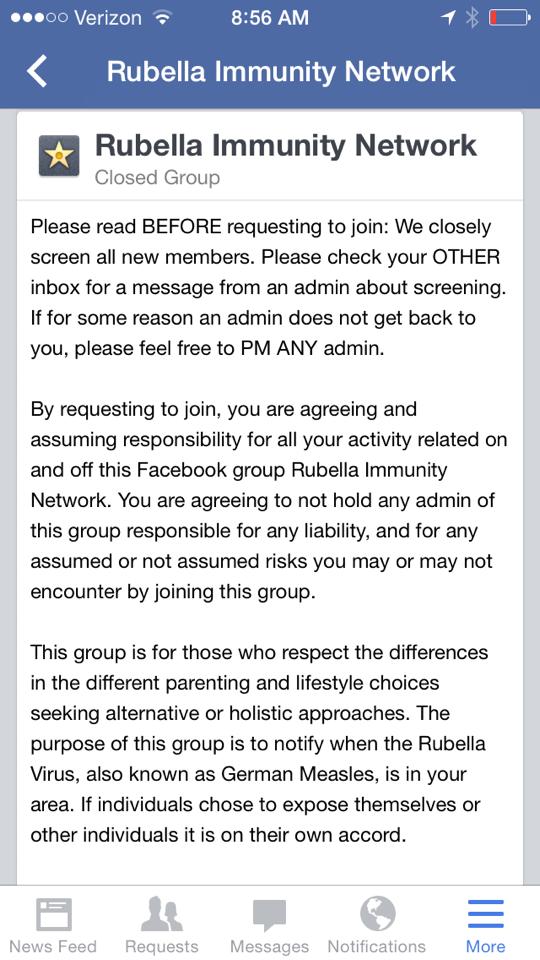 I am looking into each and every one of those names there, and I will not hesitate to contact the proper health protection authorities in the places where they live. The threat is just too great.

And, by the way, you psychopaths out there, if you’re reading this, the reason you’re having to resort to these idiotic tactics is because of the safety and effectiveness of vaccines.

“My Own Country” (1998) is a movie based on the book by the same name by Dr. Abraham Verghese. It tells the story of Dr. Verghese’s experiences in the South in the beginning days of the HIV/AIDS epidemic. The movie, like the book, is not for people who are still, to this day, close-minded about the origins of the epidemic. They should read the book and watch the movie, yes, but it is presented in such brutal honesty that it will only make them revolt against it even more. People who see this movie and are inspired to see human beings as the frail and fallible beings that we are will also come to see people as capable of unconditional love… Something reserved in literature and history only to the deity of the highest order.

Dr. Verghese was an outsider in the town of Johnson City, Tennessee. Ethiopian by birth and Indian by heritage, the movie makes it clear that he was accepted in the town only because of his education. But race is not the issue with this town, not the way the movie is framed. The issue is this new epidemic that has arrived in the form of young, gay men with AIDS. Men who were otherwise healthy and full of life begin to lose weight at a phenomenal rate, become too weak to go on in life, and eventually succumb to the disease.

The people around these young men are scared to death of what is going on. If you are too young to remember those days — and I’m not — you will see how people truly reacted to HIV and AIDS. They would not touch a person who was infected. They would not hug, kiss, or want to be around an infected person. Even Dr. Verghese’s wife asks him once when he gets home, “Did you wash your hands?” The stigmas and stereotyping are all there, and they are presented without judgment, more as the natural response of society to something that is scaring them to death — sometimes literally.

But it’s not just homosexuals that are seen to be affected in the movie. A heterosexual couple become infected when the husband has sex with men. He is dragged to the hospital by his wife and children and sheepishly admits to having sex with men and women. “I like sex,” he admits. Later, when the wife is told that both she and her sister are also infected, both from the husband, she is seen contemplating suicide. That is what I meant by being scared to death.

Dr. Verghese continues musing about homosexuality and what he is seeing all around him. It is touching because he seems to be trying to rationalize what is going on around him. We all do this. We see such horrors and unspeakable things through the news or in person and we try to tell ourselves that we, humans, are not really that evil. We can’t be. If we were, we would have never progressed as much as we have in this world.

In a post-HIPAA society, it is shocking to see how news of peoples’ diagnoses spreads through town. People are said to stand up in church and “out” their relatives with AIDS. Employees of the hospital are rumored to be spreading diagnoses to people in the community. When you realize that people who were diagnosed with HIV infection, or AIDS, were fired from their jobs, shunned by their families, or worse, you come to understand why it became necessary to have stronger privacy laws.

Somewhat humorous is a scene where a young man we meet earlier in the film has passed away. His sister comes to make sure that his body looks presentable for the funeral. The mortician is asked to put on socks on the body and returns with a silly-looking pair of rubber gloves that are more fitting for an electrician working with a high-tension wire. The sister remarks that the body is “pickled” and that there “is no bug in the world that’s going to survive that”.

We also see something that is still going on to this day: A family overriding the wishes of their dying relative while the relative’s helpless partner looks on. “We have legal authority,” they claim while the partner is brought to tears at the prospect of extending his beloved’s suffering. Without preaching, just by presenting the facts, we see how this is not the best thing for the patient, only for the family.

Threaded throughout the movie are scenes where the audience gets to see that unconditional love I wrote above about. When a gay man embraces his partner, both crying over the diagnosis, a nurse states that she wishes a man loved her like that. That embrace is powerful because people with AIDS at that time were shunned to the point that people did not want to be in the same room with them at times. Handshakes were questioned, and hugs were forbidden. Ignorance and fear, the most virulent contagions, guided people’s responses. Science and reason, the antidotes to these things, were set aside back then as they continue to be ignored today.

Yet there is hope, there is always hope. We see the hope in this young infectious disease doctor who is doing his best to inform the public on what HIV and AIDS are and what they are not. We see the hope in his staff who work with him and start to understand what is going on and what the best course of action is. And we see hope in the family members of those who are stricken with the disease and come to accept their relatives, love them, take care of them until their dying day, and become advocates in the community for those who are shunned and too weak to defend themselves.

If you are an advocate for public health, for social justice, for equality, then this is a great movie for you to see. The book goes into even more detail, of course, but the movie is powerful enough. When you see that the issues of those days are still here today, you can’t help but to want to rise up and fight it, do something about it. And we must.