One of the rules of this blog has been to not name any names, but it’s going to be broken for this post because it’s hard not to break it in this case. The person I’m going to write about is putting himself out there, sometimes vociferously, to say some things that, as an epidemiologist, I find frustrating. First, a little background. A few months ago, a friend of this blog wrote this post about influenza vaccines. In that post’s comments, the name of one Peter Doshi, PhD, came up. Dr. Doshi wrote this article in the British Medical Journal and delivered this presentation (PDF) at the “Selling Sickness 2013” conference in Washington, DC. In his article and his presentation, Dr. Doshi, who is not an epidemiologist, makes some clear mistakes about the nature of the yearly flu epidemics that we see, the deaths from influenza, and the benefits/risks of the influenza vaccine.

It’s a lot to go through, but it’s necessary to do so because Dr. Doshi’s work is coming up more and more in anti-vaccine sites like here, here, here, here, and here. Dr. Doshi makes two claims about the flu and the flu vaccine. First, that the flu doesn’t kill as many people as claimed by public health agencies (and that not that many people get it each winter), and, second, that the flu vaccine is not as safe nor effective as it is claimed to be. (If I have time as I’m writing this, I’ll touch on his claim that the alerts over pandemic flu are a way to “sell” fear or some such.)

First, Dr. Peter Doshi claims that the flu ain’t all that bad. He heavily criticizes the estimated numbers of deaths attributable to influenza:

“US data on influenza deaths are a mess. The Centers for Disease Control and Prevention (CDC) acknowledges a difference between flu death and flu associated death yet uses the terms interchangeably. Additionally, there are significant statistical incompatibilities between official estimates and national vital statistics data. Compounding these problems is a marketing of fear—a CDC communications strategy in which medical experts “predict dire outcomes” during flu seasons.”

And, from his presentation:

Here’s the thing about influenza deaths, from an epidemiological point of view. They are not reportable to public health. That is, healthcare providers and others are not required to report each influenza death (or influenza-related death) to public health authorities like they have to do with cases of Legionnaires’ Disease or meningitis. Some states do actively look for deaths associated with influenza through searching for a mention of influenza in death certificates. Others use what little money they have to pay investigators to go looking for influenza-associated deaths in hospital records of people who die at hospitals from things like pneumonia and sepsis. It seems to me that Dr. Doshi’s world is not perfect, and whatever estimation is done by CDC and others is just a “PR” ploy.

See, as an epidemiologist in our nation’s capital, I know that that these numbers are all estimates, and that they’re estimates based on surveillance systems. That is why Dr. Peter Doshi seems to be confused enough to ask “What is going on?” What’s going on is that not everyone who gets the flu gets tested, not everyone who gets tested tests positive even if they have the flu because of a limitation in screening tests, and not everyone who tests positive gets reported to public health, even if they die. It’s not a PR ploy to quote these numbers because they’re based on the best available evidence. As CDC puts it:

“CDC does not know exactly how many people die from seasonal flu each year. There are several reasons for this. First, states are not required to report individual seasonal flu cases or deaths of people older than 18 years of age to CDC. Second, seasonal influenza is infrequently listed on death certificates of people who die from flu-related complications. Third, many seasonal flu-related deaths occur one or two weeks after a person’s initial infection, either because the person may develop a secondary bacterial co-infection (such as bacterial pneumonia) or because seasonal influenza can aggravate an existing chronic illness (such as congestive heart failure or chronic obstructive pulmonary disease). Also, most people who die from seasonal flu-related complications are not tested for flu, or they seek medical care later in their illness when seasonal influenza can no longer be detected from respiratory samples. Sensitive influenza tests are only likely to detect influenza if performed within a week after onset of illness. In addition, some commonly used tests to diagnose influenza in clinical settings are not highly sensitive and can provide false negative results (i.e. the misdiagnose flu illness as not being flu.) For these reasons, many flu-related deaths may not be recorded on death certificates. These are some of the reasons that CDC and other public health agencies in the United States and other countries use statistical models to estimate the annual number of seasonal flu-related deaths. (Flu deaths in children were made a nationally notifiable condition in 2004, and since then, states have been required to report flu-related child deaths in the United States through the Influenza Associated Pediatric Mortality Surveillance System).”

Told you. Maybe Dr. Doshi should read how epidemiologists do these death estimates. Maybe he’d come to the conclusion that we’ve all come to: YES, THE FLU KILLS.

Second, Dr. Peter Doshi claims that the flu vaccine is more dangerous than we’re told and less effective than what we’re told. The effectiveness is the easy part. That one was covered by our friend in his post that I mentioned above and in an article he wrote for the History of Vaccines blog. The tl;dr version of those posts is that the vaccine is effective at different levels and for different populations. If you’re an older adult, the nasal spray will do squat for you, but it will really protect you if you’re very young. With the injectable vaccine, it will help you if you’re 18 to 64, and we can’t say that it will help in the other age groups. Although, studies have shown that the injected vaccine reduces mortality in the elderly, a point which Dr. Doshi doesn’t like. Why? Because, according to him, vaccines didn’t save us.

If that argument sounds familiar, it’s because it’s a common anti-vaccine talking point to point at graphs of mortality and say, “Look! Deaths from flu were way down before the vaccine ever came along!” Never mind that the vaccine reduced incidence of cases and death was more likely reduced through antibiotics for secondary infections and intubation for really complicated pneumonias. If you were to plot the number of influenza cases with and without a vaccine, the cases would be less. The ironic part is that Dr. Doshi mentions this in one of his slides: 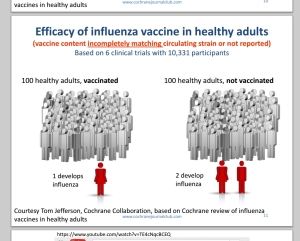 But, to him, a reduction of 50% is meaningless since it’s just one less person per 100. If we epidemiologists do the math, this turns out to be a few million in the United States alone, let alone the rest of the world. That’s not peanuts. That’s not nothing. That’s actual people who would not get the flu, not miss work, not miss school, not be at risk for complications, not pass it on to someone who could die from it, etc, etc, etc. That’s what we in public health think of when we look at the effectiveness of vaccines. The numbers may be cold, but to us they’re alive, they mean people.

Speaking of numbers, the influenza virus was not discovered until 1936, and, even then, diagnostics for it were not widely available for a long, long time. So how is it that he can plot influenza deaths during the 1930-31 influenza season? But I digress…

It’s very sad and disconcerting that Dr. Peter Doshi’s credentials as a post-doc researcher at Hopkins have made his opinions so valuable to the anti-vaccine crowds. As some of you may know, our friend is going to Hopkins to get his Doctor of Public Health degree in Epidemiology. It is my sincere hope that he runs into Dr. Doshi and they have a chat. Perhaps there’ll be graphs and charts explained. Perhaps Dr. Peter Doshi will have an epidemiology night school lesson. Above all, I hope that Dr. Doshi learns that his arguments are giving credence to some far-fetched ideas, and that he is not an epidemiologist.

Last, but not least, some other bloggers’ opinions on Dr. Peter Doshi:

“Crank “scientific” conferences: A parody of science-based medicine that can deceive even reputable scientists and institutions”

7 thoughts on “Non-epidemiologist tries to do epidemiology, feeds anti-vaccine activists”