You remember Andrew Jeremy Wakefield, don’t you? He’s the British physician who conducted a case review of autistic children and, despite what his “study” had to say on the matter, he told the world that it was his gut feeling that the MMR vaccine caused autism. Here we are, more than 15 years later after that case series was published, still having an argument about vaccines and autism. This in spite of the fact that there have been no credible, repeatable, peer-reviewed studies confirming Wakefield’s findings, or the conspiracy theories of others about thimerosal in vaccines leading to autism. (The MMR never had thimerosal in it, nor did any of the live-virus vaccines.) If anything, the science is moving more and more toward confirming the theory that autism is a manifestation of our neurobiology. That is, we’re all normal, and autistics are on one end of the spectrum of normal. Or, better stated, we’re all autistic, and those of us who don’t exhibit autistic behaviors are on one end of the spectrum of autism.

Despite years and years and years of research and spent resources on trying to confirm Andrew Wakefield’s study, there has been nothing moving the theory that vaccines cause autism. Nothing. Nada. Zip. Zilch. Then along came Brian Deer, an investigative journalist who uncovered fraud in the Wakefield study. “Fraud”… That’s such a strong word. What does it mean? According to the dictionary, “Fraud is a deception deliberately practiced in order to secure unfair or unlawful gain (adjectival form fraudulent; to defraud is the verb).” What was Wakefield’s gain in stating that the MMR vaccine caused autism? (And, let me be absolutely clear, he did say it, no matter how much anti-vaccine activists say he didn’t.) For starters, he was hired by a law firm in Britain that was attempting to bring suit against vaccine manufacturers. And he was also trying to patent his own measles vaccine. (Read all about it here.)

When all that went to hell in a hand basket for Wakefield, he moved to the United States. While here, in this great land of ours, he’s tried to sue Brian Deer and the British Medical Journal for defamation. He’s doing it from all the way in Texas. Why Texas? Why not? That’s where a lot of his most ardent supporters are located, and the Texas courts give him plenty of latitude, even allowing him to appeal the suit after it was dismissed. This, as well as his public statements and YouTube videos have made Andrew Jeremy Wakefield a topic of many blogs and news reports about his activities. As we all try to bury the “vaccine causes autism” myth, he keeps invoking several spells to try and resurrect it. He even poses in front of a half-naked autistic boy to deliver a message to his own supporters. Here’s a screen capture of the video: 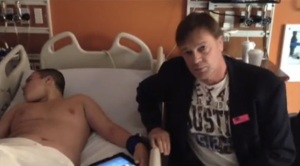 The young, shirtless man in the picture is Alex Spourdalakis, an autistic young man who was (allegedly, though there is a confession) horribly killed by his mother and caretaker. Why was he killed? Because, allegedly, they couldn’t take care of him, and they were afraid of what social services would do (or wouldn’t do) for him. In the video mentioned above, Andrew Wakefield pleads for cash to send Alex to a psychiatric institution. This begging for money is sickening for several reasons that I will touch on in a minute or two.

When this whole thing with Alex happened, as science writers/bloggers/reporters had done before, Andrew Wakefield was taken to task. One of those taking him to task was Dr. Emily Willingham. On her Forbes blog, she wrote an entry titled “If A Parent Murders An Autistic Child, Who Is To Blame?” In it, she wrote this:

“Instead of ensuring that Alex received the support and medical help he needed, some autism-related sites, while he was alive, disseminated pictures and video of the boy that showed him strapped to beds, naked, wearing only an adult diaper, and other degrading images, making claims about how the medical establishment was treating him that are, at best, unconfirmed. Regardless, making these images public was a violation of that child’s humanity and dignity as a prelude to the ultimate violation of his being murdered.”

In another post, Dr. Willingham wrote about Wakefield’s involvement in the MMR scare and what it has meant for the current measles resurgence:

“Several news outlets today are reviewing the measles outbreak in Wales, citing public health experts who lay the blame for the burst in cases squarely at the feet of Andrew Wakefield’s bogus MMR vaccine scare in 1998 and the subsequent media coverage.”

But neither of those blog posts got Wakefield all riled up and transformed into a litigious bully like this post did. The post talks about how gastroenterologists are missing diagnoses because they went with what Wakefield said:

“Another thing for which to thank Andrew Wakefield, a self-described “academic gastroenterologist.” Someone with that specialization would have been the perfect person to make this connection between anxiety in autistic people and gut discomfort. One more among so many opportunities for understanding and intervention missed, even as public health in general and the health of autistic children specifically continue to suffer.”

How riled up did he get? As riled up as Brian Deer’s uncovering of the fraud, apparently.

In a letter published by Age of Autism, Andrew Wakefield goes after Dr. Willingham in a way that would be comical if he wasn’t so goddam creepy:

“There has been a substantial amount of inaccurate and misleading reporting regarding me and my work in multiple publications. Some of the most egregious statements that have been made about me appeared in the British Medical Journal and in publications by Mr. Brian Deer. As you should be aware, I am suing the British Medical Journal, its editor Dr. Fiona Godlee, and Brian Deer for defamation in state District Court in Travis County, Texas. The case is Cause No. D-1-GN-12-000003, Dr. Andrew J Wakefield v. The British Medical Journal, et.al. The case is currently on jurisdictional appeal, a matter that is irrelevant to either the factual merits of the case or to the prosecution of defendants such as you, based, as you are, in the United States.”

In other words, “I can and will go after people who offend me, but don’t pay no attention to the fact that I’m trying to sue someone in Britain from Texas, where I live in this big, huge house.” At least that’s how I read it. Oh, because Andrew wakefield does live in a big, huge house. At the top of that letter to Dr. Willingham, Andrew Wakefield lists his address as 802 Crystal Creek Drive, Austin, Texas, 78746. Look it up and you’ll find this YouTube video giving an inside view to the house. It’s a huge place. If he doesn’t own it, the rent alone could have been more than enough to pay for Alex’s care, couldn’t it? (“Won’t you think of the children?!”)

“You are also advised that I live and work in Austin, Texas where my business is headquartered, and that my work is conducted throughout the US. Your defamatory statements about me will undoubtedly cause me to suffer significant personal and financial damage. My lawyers are currently dealing with Deer and his co-defendants. They will be turning their attention to you well within the statute of limitations for filing a case against you and Forbes.”

You know what I read? I read: “Never mind the discredited paper I wrote, all the inaccurate things I’ve said about the MMR and other vaccines, the vilification of people I see as monsters under my bed, and the company I keep… It’s your blog posts that are going to cause me ‘significant’ personal and financial damage.”

Really, Andrew? Really? Dr. Willingham has not been the only one to call your work fraudulent. I’ve called your work fradulent. It is my opinion that you are a fraud. And we’re not the only ones:

And so on, and so forth. We’re doing nothing more than to report and restate the facts of the findings of the British Medical Journal and, even more damming, the investigation into Andrew Wakefield’s fraudulent study by the British General Medical Council. In other words, these are the facts, man. Just the facts. But, true to the behavior of all known, irrational anti-vaccine types, Andrew Wakefield is trying litigious bullying to silence a critic.

Someone should tell this Brit about the Streisand Effect. Because I can assure you that any “personal and financial” damage he will incur will come more from his fraudulent study, his inane statements about vaccines, and his litigious bullying from all the way in his mansion in Texas… A mansion he must fear he’ll lose the minute a critical mass of people learn that he’s not “Nelson Mandela and Jesus rolled into one.”