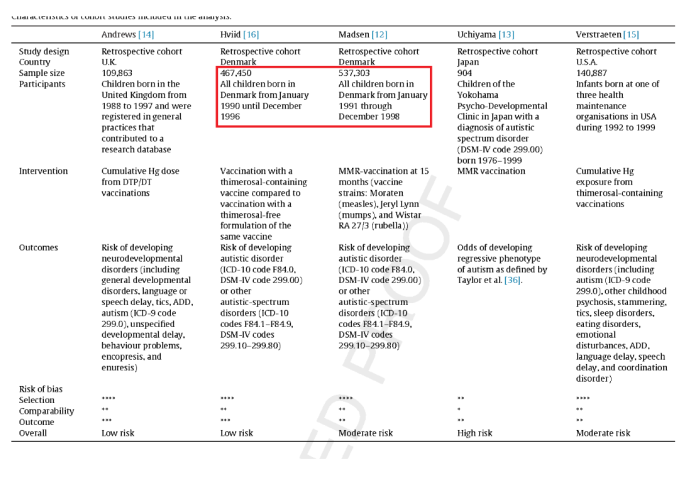 The Kid seems mad because a study being cited by CDC as evidence that vaccines do not cause autism is apparently too complex for him to understand. The study in question is a meta-analysis of several studies on the effects of vaccination on children. A meta-analysis takes different studies and analyzes their findings together to form a bigger pool of subjects, exposures and outcomes.

Larry The Kid seems angry because, according to him, the study double-dips into the same study population. Check out the image he posted:

Now, check out his argument against it:

“In “Vaccines are not associated with autism: an evidence-based meta-analysis of case-control and cohort studies,” the authors estimated the total number of children in the cohort studies by adding up the samples of each study. The problem is that the two largest studies used mostly the same children, as the first table in the meta-analysis makes clear.

Here is one study population description:

All children born in Denmark from January 1990 until December 1996

All children born in Denmark from January 1991 through December 1998

Every child born in Denmark from January 1991 to December 1996 was double-counted. As a result, the authors calculated the total children who participated in all five studies as numbering 1,256,407.

That number is completely bogus. It is not even possible to calculate an estimate of the number of children who participated in either Danish study by reviewing the published manuscripts. Not surprisingly, the authors’ grasp of the material they analyzed reflects their grasp of the vaccine issue overall.”

Second, look at the protocol they used for including studies into the meta analysis. They used the PRIMSA guidelines for meta analyses. It’s not like they willy-nilly added these two studies in just because.

On the surface, it may seem like The Kid does raise an interesting argument in that the children born between January 1991 and 1996 are counted twice from the two studies. Epidemiologically speaking, though, there’s nothing wrong with this. That group of children count twice because they contributed information to two studies.

Look at it this way. If we want to know whether or not there is an association between aspirin and reduced risk of heart attacks, and we also want to know if there is an association between a low-fat diet and reduced risk of heart. Can we study you, for both of those interventions (aspirin and low-fat diet) and that one outcome (reduced risk of heart attacks)? Absolutely. Are we double-counting you? Yes, from a non-epidemiological point of view, and no, from an epidemiological point of view. As long as we account for the interactions between the two exposures (if any) in the analysis, this is not a problem.

The Kid should know this. After all, he boasts about his MPH in epidemiology from the George Washington University. He’s called himself an “epidemiologist.” (He’s not, in our opinion, just like someone with an MD is not a physician if all they do is sit at their parent’s expensive home in Florida and rage against feminism without actually treating a single patient.) But, time and again, he writes things that make us question whether or not he paid attention to anything in the basic epidemiology courses.

But his behavior regarding vaccines follows the anti-vaccine playbook very closely. He tries to seed doubt in the safety and efficacy of vaccines at every possible opportunity. And he makes simple things into big deals to try and push the anti-vaccine agenda.

2 thoughts on “Tricky Larry Is at It Again”